The Dagon Clan wines are quite different to Mark Haisma’s French wines. Although we are not talking massive commercial quantities, there is a really wide appeal to them, and their pricing is very competitive with less well crafted wines from Western Europe.

This is the time of year when London is awash with Burgundy Tastings as all the agents wheel out their portfolios for the newly bottled vintage, 2016 in this case. There is a lot of positive noise from those who have ever increasingly expensive wines to sell. The general view of the critics is fairly nuanced with the reds getting plenty of highish marks from the best producers, with less enthusiasm in some quarters for the whites. The overall warning, however, is more about price.

One of the highlights of the winter tasting round for me is that hosted by Mark Haisma and Andrew and Emma Nielsen of Le Grappin. With Jane Eyre they have collectively become known as The Ozgundians, although the Tasting also includes the wines of two young Burgundian producers now, Jeremy Recchione and Jane & Sylvain Raphanaud, along with a taste of Vincent Paris Cornas and the Romanian wines of Dagon Clan, with whom Mark Haisma is associated.

The London Tasting is always organised by the producers and now seems firmly planted upstairs at Vinoteca, on Beak Street in Soho.

The 2016s provided an interesting contrast to the often fuller wines of 2015. From what other people have said of the event, I think my views are broadly in concurrence with the mainstream, but with perhaps one or two differences of opinion. If you read this and do disagree with my own opinions and assessments, please do feel free to leave a comment. I’m not Robert Parker. I will excuse the fact that this article is rather long, but I’m sure those who are seriously interested in these wines will cut me some slack.

The Dagon Clan wines are quite different to Mark Haisma’s French wines. Although we are not talking massive commercial quantities, there is a really wide appeal to them, and their pricing is very competitive with less well crafted wines from Western Europe.

Of the two whites, Clar 2016 is fruity and fresh, whilst Clerstar 2016 is a field blend, bottled with a tiny bit of residual sugar to balance the acidity of the Feteasca Regala, Feteasca Alba and Sauvignon Blanc varieties. It is fresh, but well balanced and more rounded than Clar. 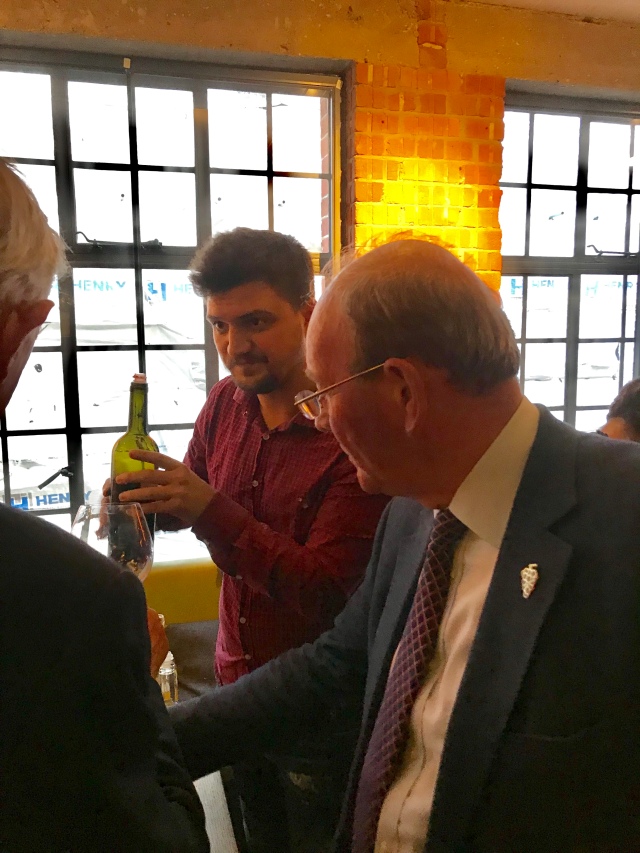 There are two versions of Jar which blend Feteasca Neagra, Romania’s most highly regarded red variety, with French grapes. The blend with Pinot Noir has mouthfilling cherry fruit and a brambly finish. The second blend, with Cabernet and Merlot, has quite a bit of plummy Merlot showing through, despite the blend being 40:40:20. The Merlot is also picked a little early to avoid high alcohol. The other grapes contribute a nice black fruit lick on the finish.

The third red from Dagon Clan is what they call their “estate wine”, Orama, and is 100% Feteasca Neagra. This native grape is planted on the sandy soils of Valea Nucetelui in the famous wine region of Dealul Mare (north of Bucharest). Only one 500 litre barrel was made (it’s the wine in the photo below with a temporary label), in which it was aged 16 months. At the moment it has an elegant nose and a good tannic structure.

This more serious wine aside, the Dagon Clan range should have wide appeal and I’m quite surprised not to see it in more small independent wine shops. There may be a slight prejudice against Romanian wines among the wider public, yet this beautiful country has a long tradition of viticulture, and has at least as much potential (if not more) than any other Eastern European wine producer. The wines clearly show the hand of Mark Haisma, with an understanding of the New and Old Worlds. And the prices are still very attractive.

The Annual Tasting of the Ozgundians et ors is now one of the exciting wine fixtures of the New Year. It’s always somewhere I bump into people I rarely see, but I can be sure they will be there to taste what they have already ordered with confidence. Without exception, there are wines from all of these producers I’d be very happy to drink and own. That is really the problem, how to choose, which can only lead to head scratching, soul searching, and looking deeply into the communal purse.